Mongo is a slang word for stupid or trashy things. The Mongo push is a stance in skateboarding that lets you skate through a non-dominant foot. This stance is the opposite of any normal stance i.e., goofy or regular. That’s why it is named Mongo.

What is Pushing Mongo?

When a Person Pushes with his front foot instead of his back foot it is called pushing mango. If your skating stance is regular then pushing with your left feet is considered a Mango push, And if your skateboarding stance is goofy then pushing with your right feet is considered a mango. Mongo Push is referred to as an unnatural stance in skateboarding

Though Mongo’s stance is a bit unusual, if you are comfortable with it, then continue to enjoy riding various tricks. You should be aware that most skaters consider this stance as an idiosyncratic or non-practical one. But, for beginners, this stance helps them to learn

Why Does Mongo Skateboarding Receive So Much Hate?

Have you ever witnessed people laughing or mocking skaters skating Mongo? Yes, You are. Skaters don’t like mongo because you seem silly while practicing that stance. There are also various reasons which make people hate it. Such as

Providing No Stability And Balance

The major drawback of Mongo push is that it is hard to balance and maintain stability. When skaters stand at the rear of the tail, they are placing their whole weight towards the end instead of balancing it on the whole skateboard. Therefore, there is a higher risk that the nose may arise due to this unbalanced weight. Moreover, any rough road ahead can let you fall off the deck easily.

Read More: Find out the Best Skateboard For Beginners

Furthermore, it is really hard for Mongo skaters to learn the right position for foot placement. Some skaters place it in the center while others at the rear, which provides them no thrills of skating.

While pushing Mongo, you have to go against your natural stance. When you position yourself for any trick, it takes time. This long time for positioning and balancing yourself cripples you to perform intricate tricks that require swift timing like kickflips or ollies.

If you are a skater who wants to perform to entertain your audience, then this stance is not for you. Performing tricks with Mongo stance gives a weird feeling and makes you look silly. The reason is you are doing something a bit odd and opposite. That’s why most people find it funny. It also gives the impression that you are not professional.

Not Good For Speed

Mongo stance does not generate faster speeds because you are pushing the skateboard with the opposite foot, which is already not used to work more. Moreover, it will be harder to ride faster-skating rides with less balancing.

Does Mango Stance Do Any Good?

Despite its unbalancing and limited tricks, this stance gives you some plus points, which we have discussed here as follows.

You may find it a bit odd, but you can quickly jump over the pebbles or other hindrances if you learn to balance with the Mongo stance. By shifting weight at the back, the skateboard rises from the nose, letting you cross over the hindrance easily. You need a lot of practice with the Mongo stance; otherwise, you will fall on your face to the ground.

If you learn Mongo skateboarding with your other natural stance, it will be easy to go for longer cruising. For instance, if you have planned to cover 10 miles, then pushing through one all the way long may get you tired. But, if you are a pro at Mongo, you can use both legs without putting all the workload on one leg.

The Mongo stance is also popular among downhill skaters. During racing downhill, Mongo enables skaters to shift their weight backward and provides them with more stability as they are going downward.

If you have learned Mongo, performing switching tricks will no longer be a challenge for you.

We can say that it’s just a superstition that you look idiosyncratic if you are doing mongo. Some professional skaters performed mongo skateboard This shows that the true essence of skating is enjoying your talent and not just pleasing others. The famous mango pushers are

A devoted skater can never forget what Kingo of Mongo, Randy Colvin showed in the 90’s. If he can perform intricate skating tricks in a mongo stance during his heights of skating fame, then anybody can. This ‘Two World Industries Men’ opted for mongo when most skaters were unaware of it. This shows his true passion for skating and living the true essence of every skating ride.

This pro skater is famous for challenging tricks that no one else can think of. Tom was already mastered at flip tricks when people rarely performed 6+ stairs tricks. You would be surprised to know that Tom started his skating career as a Mongo pusher. Later on, he corrected his stance.

Skateboarders like Chris Cole also pushed Mongo in his early skating career. But, in a video, he said he needed to change his perspective if he wanted to be successful in skating. Then he switched to a regular stance later on.

Bill Danforth pushed off mongo when every skater was free in his skating style i.e., the late 80s. He was known as “Pushing Dan” due to his unique skating style. Still, he also received hatred for it as he was also called ‘stupid footed,’ ‘piss pedaler’ or ‘rear-wheel drive

How To Get Rid Of Mongo Stance?

If you have started skating as a Mongo and want to perform more intricate tricks, you need to change your stance. The Mongo won’t provide you enough stability and balance; that’s why Chris Cole also switched his style. Yes, it’s true that if you become used to something, then it’s hard to change it. We have brought some tricks that will help you out in changing your stance.

If you want to learn something from scratch, then it’s better to start taking small steps first. You can start with cruising in a regular stance at low speed to correct your mongo stance. Once you are comfortable with cruising, you can take more challenging steps with a regular stance.

When you start skating with a regular stance, you will find it challenging and get tired easily. Therefore, get incline on your knees with your right or left hand. Then push your board with a regular or goofy stance. This style will help you to skate in a normal position without getting tired.

Nothing is easy if you don’t push yourself to do it, especially getting rid of your natural stance. If you have entered your comfy zone with skateboarding mongo, it will be hard to change it, but still it’s possible. When skating in a different stance, you will always find yourself skating in mongo naturally. Therefore, you need to be vigilant and whenever your body puts you in your comfortable stance, force your body. Get off the board again and again and skate with a regular stance. Though it’s hard, it will help you change your stance.

Read More: if you Looking for Best Skateboards for Beginner Girls

Skateboarding is a sport of freedom. There is no hard and fast rule to skating. You can skate with mongo or regular, which suits you the best. But, if we compare mongo vs regular push for challenging tricks, we can’t ignore the instability, and low balance the mongo push provides. So, it’s better to switch your style. If you just want to cruise, then mongo style is still ok.

Is Skateboarding Hard to Learn?

I am Andrew Wilson, a skateboard enthusiast. I have been skateboarding since my early childhood. Now, I want to share my knowledge with skaters out there. So, they can avoid such challenges which I faced in the beginning when I started skating.

More from this author 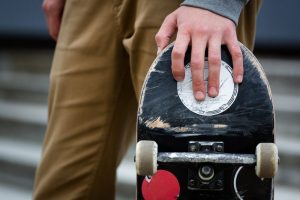 Tips and Tricks
When Should You Replace Skateboard Deck? 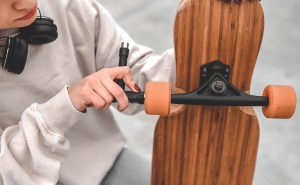 Tips and Tricks
How Tight Should Skateboard Wheels Be? Expert… 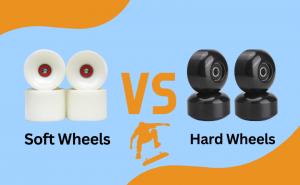 Tips and Tricks
Hard Vs Soft Wheels For Skateboarding? Which… 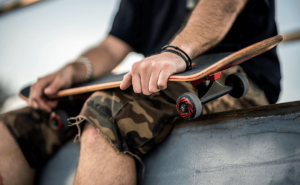 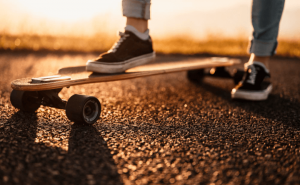 This is my personal blog where I have shared everything about skateboarding. I've talked about my personal experiences with skating gear, different types of skateboards, which styles or tricks they're best for, and other skating skills.

Skating nerds” is a participant in the Amazon affiliate program known as amazon associates which promotes amazon products. Whenever you click a particular product through our embedded links, we earn a little commission in return.